Concrete Curbing is most commonly seen around parking lots and on roadways. We install and repair all curbing.

What is Concrete Curbing? 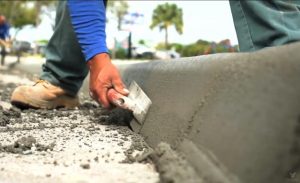 Their are several different types of curbing:

Why is Concrete Curbing Important?

Concrete Curbing is important because it provides a structural border between landscaping and pedestrian or roadway surfaces. Concrete Curbing can also assist in drainage.

How is Concrete Curbing Installed or Repaired?

If Concrete Curbing is going to be newly installed, the first step is preparing the area for the new curbing.

Many times this includes trenching or excavating the area, and ensuring there is a suitable base on which to pour the new curbing.

Sometimes, a ‘curb pad’ is poured as a base to provide an appropriate support, or DOT approved limerock may be supplied, installed, and compacted to an adequate base.

Once the area is properly prepped for new concrete, curb mix concrete is loaded into a curb machine which then runs along the side of the new curbing and extrudes the concrete to the proper shape. For added tensile strength, a steel cable, fiber mesh, or rebar may be inserted during the extrusion process. 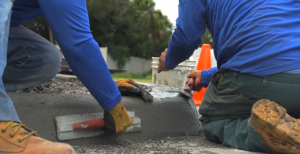 Once the concrete is installed, any edges are finished by hand.

If existing Concrete Curbing is going to be repaired, the first step is removing the existing damaged curbing.

A professional grade wet-saw with a diamond blade is used to cut the edges of the damaged section of curbing and then it is removed and properly disposed of.

Next, the area is assessed for what is causing the concrete curbing to become damaged in the first place.

Often times it may be the roots of nearby trees that have lifted up or cracked the curbing. Other times, the damage was caused by impact from a vehicle. If the damage is root-related, the tree roots may be saw-cut and removed or ground down using a stump grinder.

Once the area is free of obstructions, the new concrete curbing is installed in the same manner described above.