Asphalt overlays are often more economically practical than new pavement since a proper foundation has already been established. We lay a new asphalt over the existing surface, providing a fresh, new look to any parking lot or roadway. 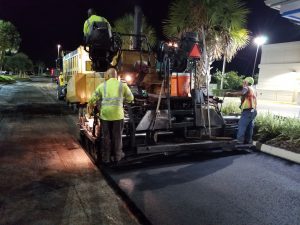 Asphalt overlays are an ecologically friendly and simple way to obtain a sleek appearance without having to completely re-purpose the foundation that you plan on using.

Asphalt overlays simply use a 1-inch layer over the top of the existing foundation, making it a much easier and cost-effective approach.

Some asphalt surfaces with severe damage like rutting, potholes, large cracks, and expansions will need to be milled before an overlay is able to be applied.

What is Asphalt Overlay?

Asphalt overlay is a paving method of applying a new layer of asphalt to a deteriorating surface.

Rather than tearing up old asphalt surfaces entirely, an asphalt overlay project uses the existing layers as a base for the new asphalt pavement.

Depending on the depth of the existing layers as well as any damage or erosion that may be present, multiple layers may be required to provide a like-new appearance.

Asphalt overlay is simply a faster and more streamlined process for getting a brand new, clean looking pavement surface.

Whether for appearance purposes or for re-fortifying the integrity of an existing lot of asphalt, utilizing an asphalt pavement overlay will strengthen it and improve its overall appearance if done properly.

How Are Asphalt Pavement Overlays Completed?

Asphalt milling will remove the top layer of an asphalt surface that has taken on cracks or other damage. 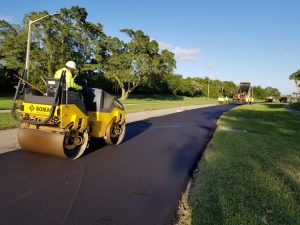 The old layer that has sustained damage must be removed to ensure an even bond when the new asphalt is applied and also to maintain a level surface.

An asphalt milling machine will grind down 1″ to 3″ depending on the wear of the asphalt surface.

The ground surface material will then be hauled to an asphalt recycling plant where it can be integrated into new asphalt mixes.

The base of an asphalt surface may need to be replaced in areas where potholes, rutting, and sinking have formed. In order to ensure a severe problem will not form again, the base of the asphalt surface will be rebuilt using multiple layers of aggregate and asphalt.

Additional options which can be added to an overlay project:

An option that may be included with asphalt resurfacing is Petromat. Petromat is a non-woven, petroleum-based geotextile fabric used to retard reflective cracking between the existing pavement and the newly installed asphalt surface. This fabric acts as a waterproofing membrane while also adding structural support and strength.

In low areas, hot asphalt is installed at various depths to adjust pitch to proper grades while increasing parking lot strength. This step is important to ensure a level surface throughout the area. 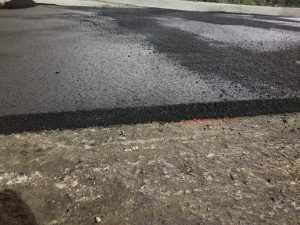 When pavement deteriorates due to lack of maintenance, it can often seem like it’s at the end of its lifespan – and you may think you need to demolish it and rebuild a new parking lot from scratch.

But with an asphalt overlay, you may be able to get more out of your asphalt than you thought possible and save money in the process.

Like a facelift for your parking lot, an overlay adds new life to older asphalt. It helps to repair flaws in the existing surface by adding a new layer of fresh pavement to the top – giving it a brand new appearance at a fraction of the price. 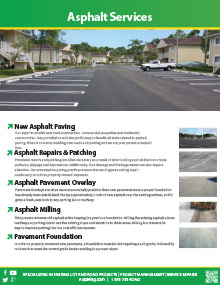